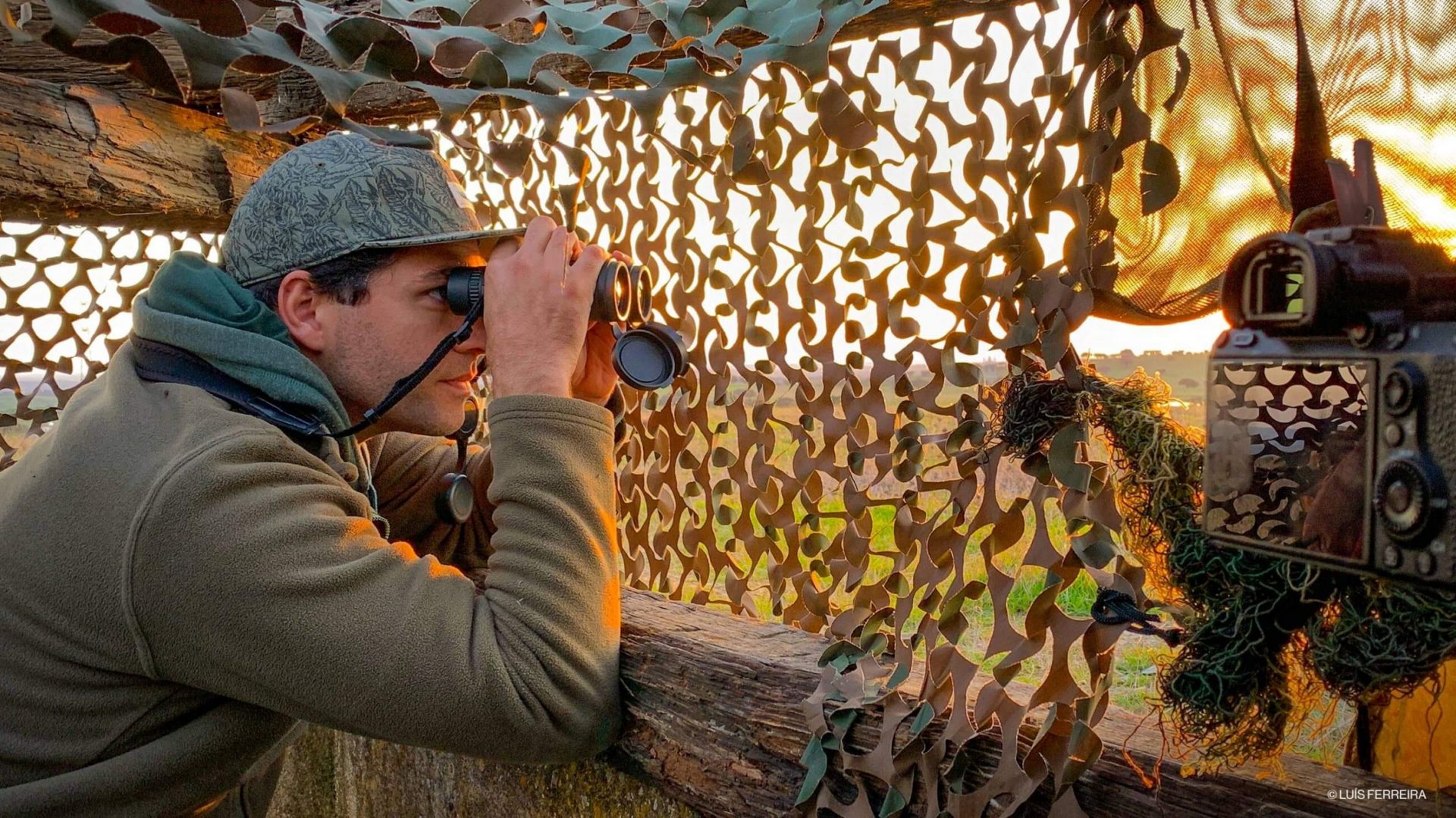 From an early age, Luis Ferreira has been drawn to the appeal of nature and has documented it in many different types of photographs, but it is his passion for animals and their protection that has driven him on adventures all over Portugal. Endangered species, which are difficult to capture on film, are the subject that most appeals to him. “If I’m holed up in a wildlife hide for hours on end waiting for a very rare species that is very difficult to photograph, that game appeals to me; it becomes a ‘hunting game’, but one in which the animal isn’t harmed.”

For Luis Ferreira, photographing species such as the Great Bustard (Otis tarda), “Endangered” (EN) in Portugal; the Iberian Ibex (Capra pyrenaica), “Critically Endangered” (CR); the Western Swamphen (Porphyrio porphyrio), a “Vulnerable” (VU) species; or the Black-Winged Kite (Elanus caeruleus) and the Griffon Vulture (Gyps fulvus), “Near Threatened” (NT) species, is especially important “I feel it is important to bring them to light, highlight some of their behaviours, and raise awareness, particularly among children, who I believe can make a bigger difference,” he explains.

For this reason, he also dedicates himself to the Educate to Preserve project, in addition to his photography and videography work; he visits schools and shares facts and trivia about various different species with children, always in a way that is educational. The project has already reached more than 400 children and the objective is to continue raising awareness among young people, encouraging interest in wildlife and promoting a sense of civic awareness.

Luís Ferreira shares many of the “special encounters” he has witnessed with the children and anyone else who follows his work. His encounter with a Bonelli’s eagle (Aquila fasciata) is one of them. The bird in question is a “very intelligent animal” which, despite its careful camouflage, is aware of any unusual presence in the area; as a result, it is a difficult species to photograph. Another of his encounters, a hundred vultures at a “giant feeding feast”, was “unique and striking”.

Repeated encounters with Cory’s shearwaters (Calonectris borealis), a “Vulnerable” species on the mainland and of “Least Concern” (LC) in the archipelagos of the Azores and Madeira, are indicative of a very special relationship. His “huge love” for these sea birds has taken him three times to the subarchipelago of the Selvagens Islands, 280 kilometres south of the main archipelago of Madeira. Out of these visits, and after a year spent applying for permission, the book Ilhas Selvagens (Selvagens Islands) was produced. He speaks enthusiastically about the privilege of being on the islands, which have been classified as an Important Bird Area (IBA) by environmental organisation BirdLife International.

Four stages and many helpings of patience and dedication

Behind every photo in Luís Ferreira’s extensive portfolio lies meticulous work over several different stages. In addition to what can amount to several days of fieldwork, there is plenty of waiting that may or may not result in the much sought-after results; in this case, photos capable of portraying the unique characteristics of each animal.

A travel-loving great-uncle of his encouraged him to grab a camera and take his first picture, in which he captured a sunset. He was 14 years old. Now 40 years old, he recalls how, at the age of 16, he bought his first camera to document a trip to Slovakia, as part of a student exchange programme. Upon seeing his camera, the members of the group he was travelling with decided that he would be in charge of photography—in total, he took eight rolls with 36 exposures each.

Taking a lot of photos plays an important role in the development of a good nature photographer, but other specialisms have been equally important in Luis Ferreira’s career and have served to enrich his work. His background in industrial design was one of them: it led him to delve into the history of art and aesthetics, and to acquire an understanding of classical painting. Similarly, a sense of curiosity regarding the work of one’s peers plays a role, he reveals.

Twenty-six years after his first sunset, when posed the question “Are any photos you still want to take?”, his eyes begin to light up again. His next move is to specialise in underwater photography. As if he were describing a canvas yet to be painted, Luis Ferreira explains: “for my project with the Cory’s shearwaters of the Selvagens Islands to be complete, I need an photo of a bait ball with dolphins and shearwaters diving to reach the fish”.