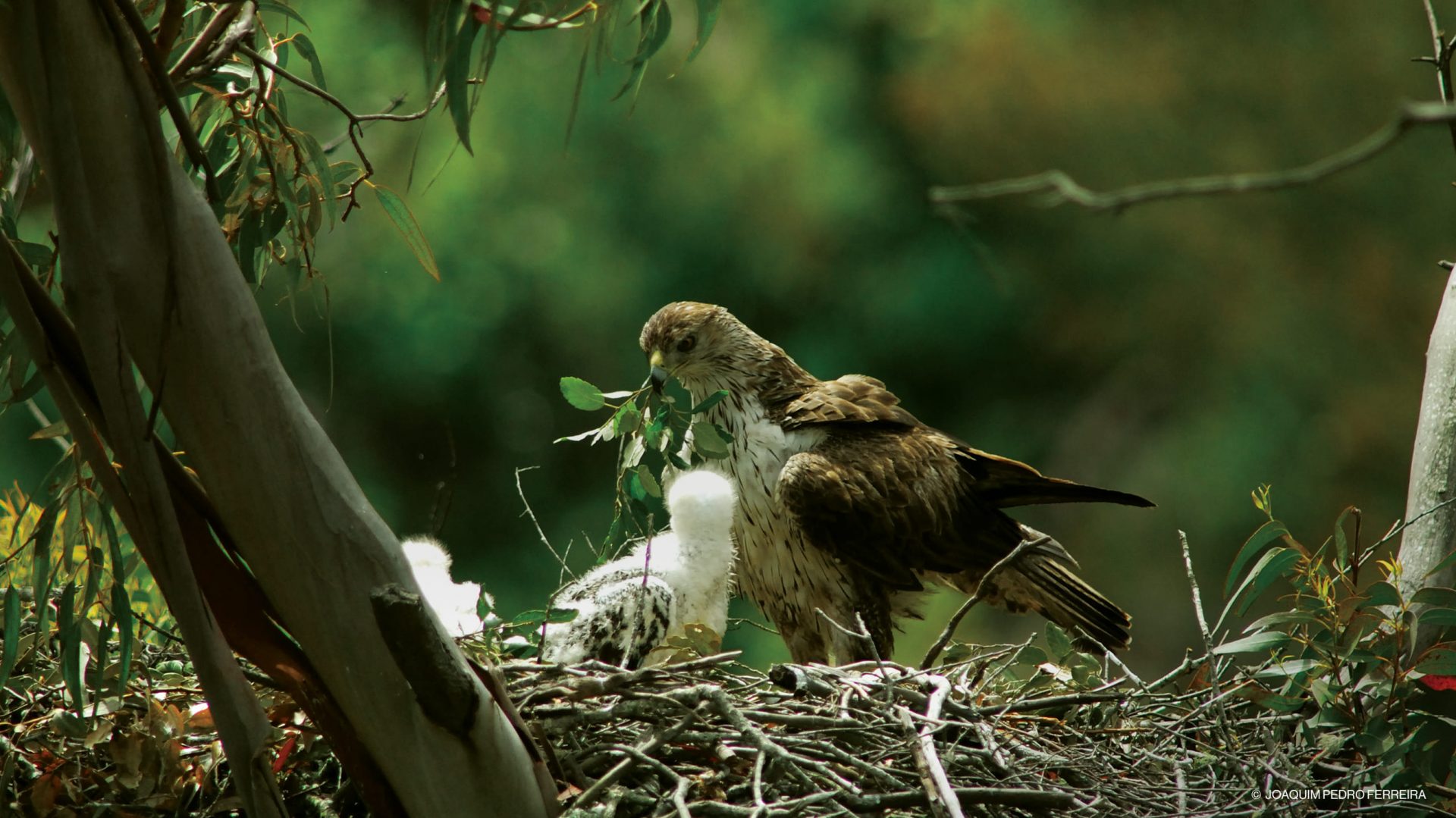 Bonelli’s Eagle, also formerly known as the crestless hawk-eagle, is not an uncommon sight in the skies of Portugal. It is an imposing bird of prey which, as an adult, can have a wingspan of over one and a half metres.

A majestic, medium to large species, the Bonelli’s Eagle is a Mediterranean and Asian bird of prey native to Portugal, where it finds different habitats to support it all year round.

In the north and centre (Trás-os-Montes, Douro, Beiras interiores and Estremadura), steep valleys near streams and rivers are perfect nesting sites. To the south, the Bonelli’s Eagle chooses rugged areas forested with large trees, including cork oaks, pines and eucalyptus in which to build its nest, as is the case in the mountains of the Algarve and the south-west Alentejo.

For hunting, it prefers open areas — cork oak plains, pastures or agricultural land. Its diet is based on mammals, birds and sometimes reptiles. This includes, for example, wild rabbits, partridges, pigeons and grey herons. It was known as the hawk-eagle because it hunts other birds in flight. No prey — or potential predator — escapes its keen eyesight.

It is a monogamous species that usually nests between January and June. Normally, only one or two chicks are born in each clutch. After hatching, the female stays close by, while the male is tasked with bringing food.

With its dark brown wings, light tail with a broad dark terminal band, white belly and breast speckled with brown feathers, and a white spot on its back, the Bonelli’s eagle is as beautiful as it is difficult to spot. Its rarity makes it even more difficult to identify in Portugal.

It is classified as Endangered, according to the Red Book of Vertebrates of Portugal (2005). Human disturbance to habitat and food are among its main threats, including logging of large trees, forest loss, electrocution, wind farms, rural fires, recreational activities and hunting during the breeding season, adverse weather (storms, for example) and one disease in particular – trichomoniasis (caught from eating infected domestic pigeons). Overall, although its numbers were declining, it was considered a species of Low Concern (2019).

How we are looking after Bonelli's eagle

The Bonelli’s eagle has been identified at different properties owned by The Navigator Company, mainly in the Southwest Alentejo and Algarve, but also, to a lesser extent, in Trás-os-Montes and Alto Alentejo. In all these areas, they have benefited from the monitoring and protection measures implemented by the company since 2006.

Initially, Navigator worked with the CEAI – Centre for the Study of Iberian Birdlife – to develop a conservation plan on its properties, as part of the LIFE Natureza Project “Conservation of Tree Populations for Bonelli’s Eagle in Portugal”. This established case-specific buffer zones around nests, to restrict activities impacting on the area during the critical breeding season.

As part of this project, artificial platforms were also built for eagles to build their nests. Later, a manual of best practice was produced with contributions from various local stakeholders. The success of these initiatives has shown that the “sustainable conservation of the Bonelli’s eagle population in the south of Portugal can be reconciled with the economic and recreational use of its habitats through the responsible involvement of all interested parties”, says Rogério Cangarato, an ornithologist involved in preserving the species and supporting the company in this challenge.

Since then, the nests have been monitored annually, by sampling, and where there is nesting inside the company’s properties, High Conservation Value Areas have been established. The stability of more critical areas in the vicinity of the nests has led to a change in the cutting cycle of the forest stands and, in some plots, eucalyptus trees were maintained, leading to the formation of groves of mature, large trees that can support and maintain nesting sites.

Since the start of the project, Navigator’s forestry officers have received training on the conservation of the Bonelli’s eagle, and they also avoid disturbing these areas in their daily forestry operations.

In general, activities with the greatest impact — such as planting or cutting down trees — are planned for times when they do not interfere with the reproductive cycle of these birds, whose success requires peace and quiet. “As they are a relatively stable species, when they have good habitat we know where they are nesting and we don’t interfere with the management of the property,” says Rogério Cangarato.

As of 2022, 14 Bonelli’s eagle territories have been identified, with nests on or around Navigator properties (within a 500 metre radius) where these protection measures have been applied.