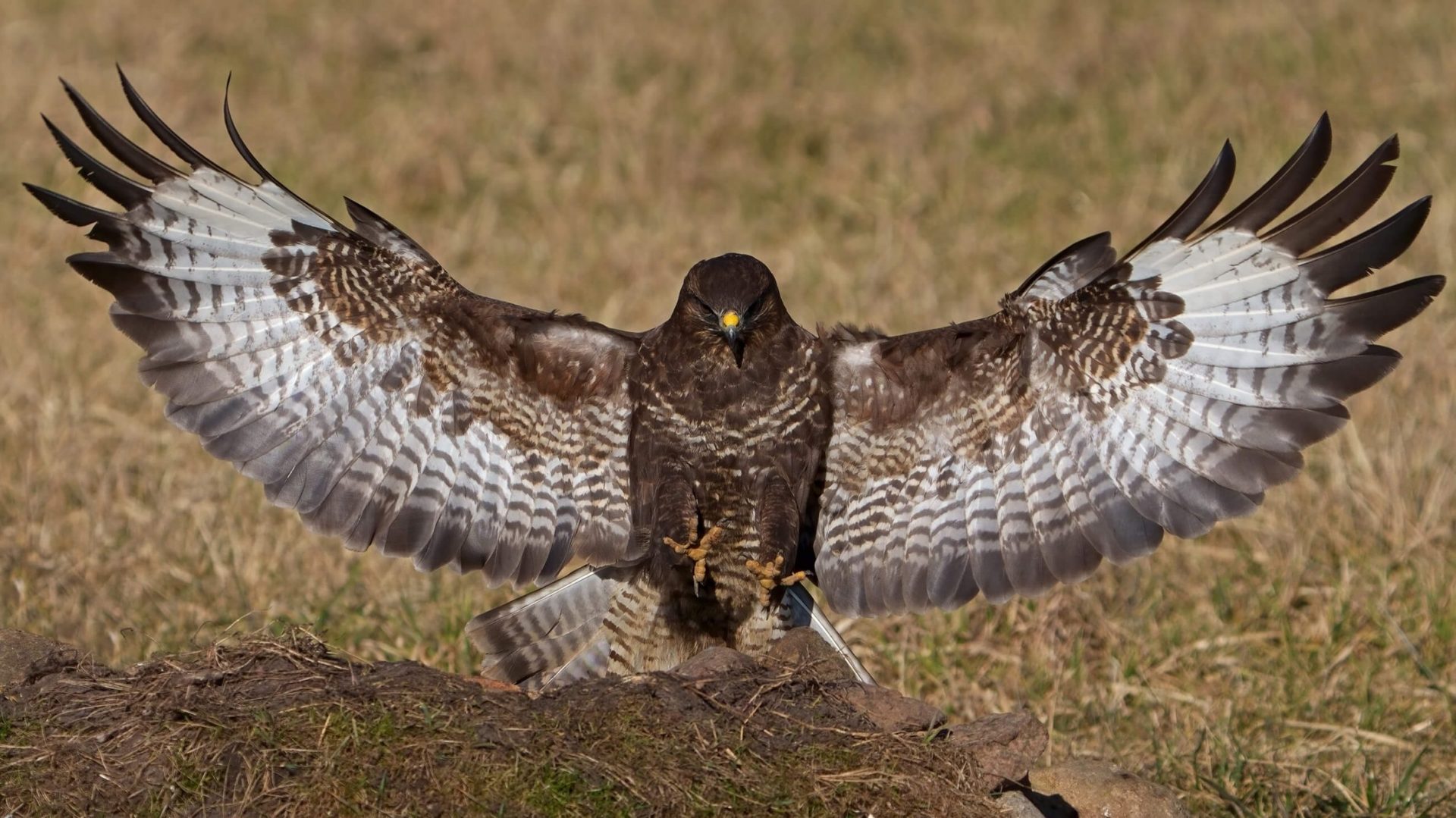 The common buzzard (Buteo buteo) is a medium-sized bird of prey and is very abundant in Portugal. It is a bird that lives in diverse habitats, but always on the edge of either coniferous or hardwood woodland and open areas, such as pastureland, crop fields, marshland, wetlands, and even mountainous regions.

It resides in Portugal, i.e. it reproduces and is present throughout the year, and is widely distributed across mainland Portugal and the archipelagos of Madeira and the Azores. During winter, the population of this species may increase with the arrival of specimens from northern Europe.

It is a diurnal bird of prey that can be identified through its compact silhouette, broad wing span, and short, broad neck. It is sometimes smaller than a raven (Corvus corax). The plumage is normally dark (mainly brown), but has light spots on the tail and chest (where it forms a collar-like pattern) that can be identified in flight.

It is a monogamous species that nests only once a year, in the crown of tall trees such as the maritime pine (Pinus pinaster), eucalyptus (Eucalyptus globulus), and oak trees (Quercus spp.) like the cork oak (Quercus suber) and holm oak (Quercus rotundifolia), but also in cliffs. It may occupy the same nest from year to year, bolstering it when needed, but it is not always faithful to the same tree, and will often change to another nesting site. During the breeding season (from March to July), the males gather materials to build their nests and show off their mastery of the skies to the females by performing dives and aerial acrobatics. These materials include twigs, branches, some grasses, and bushes.

Females lay an average of two to three eggs, which are white with brown spots. After hatching, the chicks are fed by both parents until they become independent, which can take up to three months.

As for feeding, the common buzzard prefers small mammals, animal remains, but also small birds, reptiles, amphibians, and also insects and worms. They usually seek high places, such as telephone poles, to locate their prey in fields and lowlands, but can also sometimes be seen gliding or even actively “hovering” during their hunts. Because of its preference for panoramic views, the buzzard eagle is an easily sighted species.

It is an abundant bird in Europe, which has seen its population increase in recent years, so its conservation status is Least Concern (LC) (according to the IUCN Red List). As it occurs over such a wide distribution area, this species has several recognised subspecies, including one that is only present in the Azores archipelago (Buteo buteo rothschildi). In Portugal, the subspecies present is buteo. 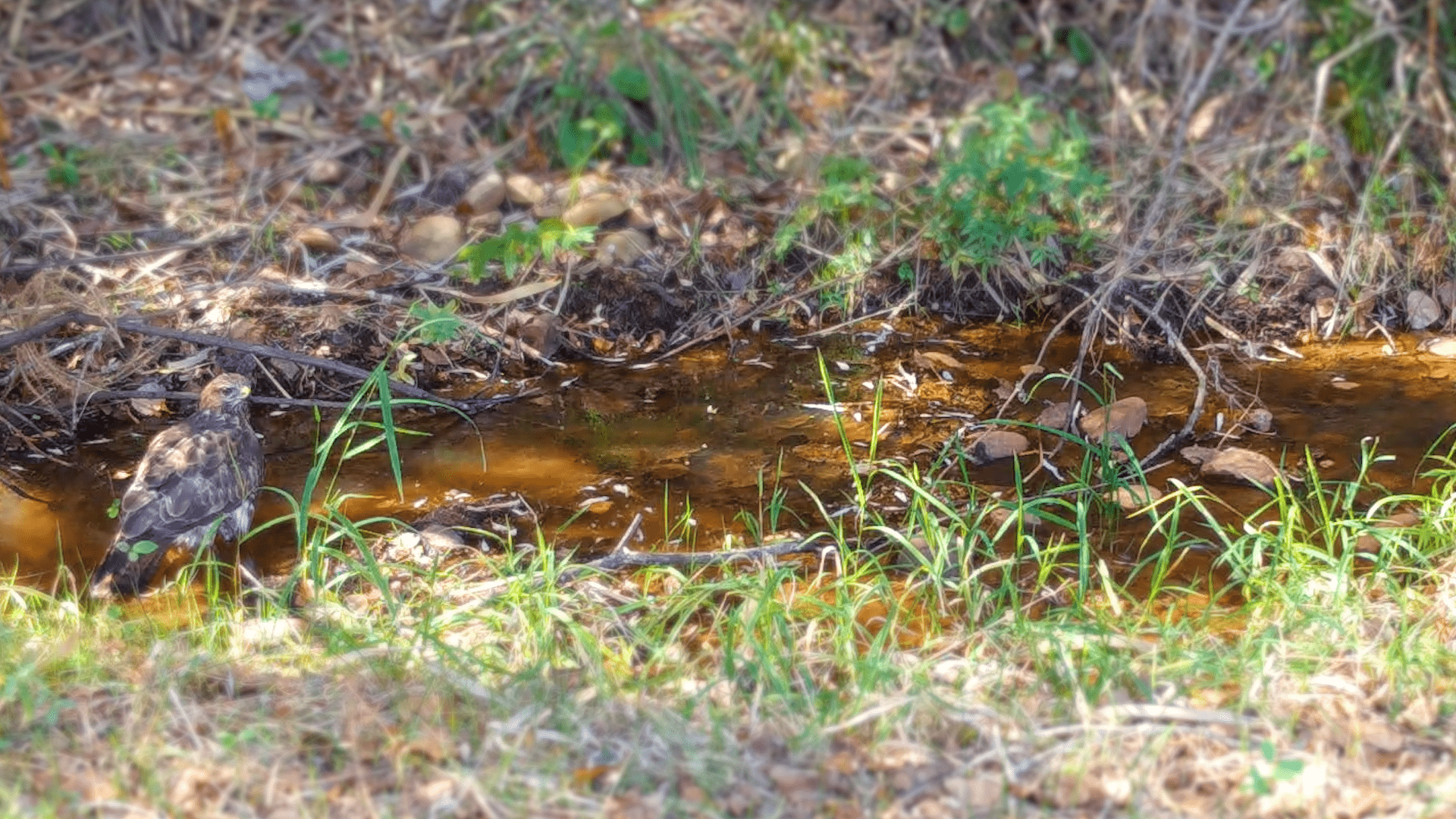 How do we look after the common buzzard?

There are some reports of this species nesting in properties managed by The Navigator Company from the north to the south of Portugal. In these locations, buffer zones were created around the nests, restricting the impact of activities on the ground during the critical period of reproduction. These sites are monitored by sampling, which checks to see if the birds return to these locations.

At Herdade das Antas, near Messejana (Aljustrel), a pair of buzzards built a nest in a production eucalyptus plantation (where a colony of Spanish sparrows, Passer hispaniolensis, also nests), and the company has marked off and maintained a small eucalyptus copse to protect the nesting site (pictured), which is now a conservation area. Another instance of nesting in a eucalyptus production area occurred in Serra do Socorro, Torres Vedras, in a nest previously occupied by a northern goshawk (Accipiter gentilis).

At Quinta de São Francisco, it is a very common species that can be sighted across the whole 14 hectare estate, and it has been confirmed as a breeding site. It can easily be spotted around midday in circular flights above the canopy, taking advantage of the rising thermal currents to move to hunt in the open areas and crop fields adjacent to this woodland. Sometimes, in the middle of the forest, it is possible to hear the call of the two members of a couple or the calls for food from their young, especially around the month of May.