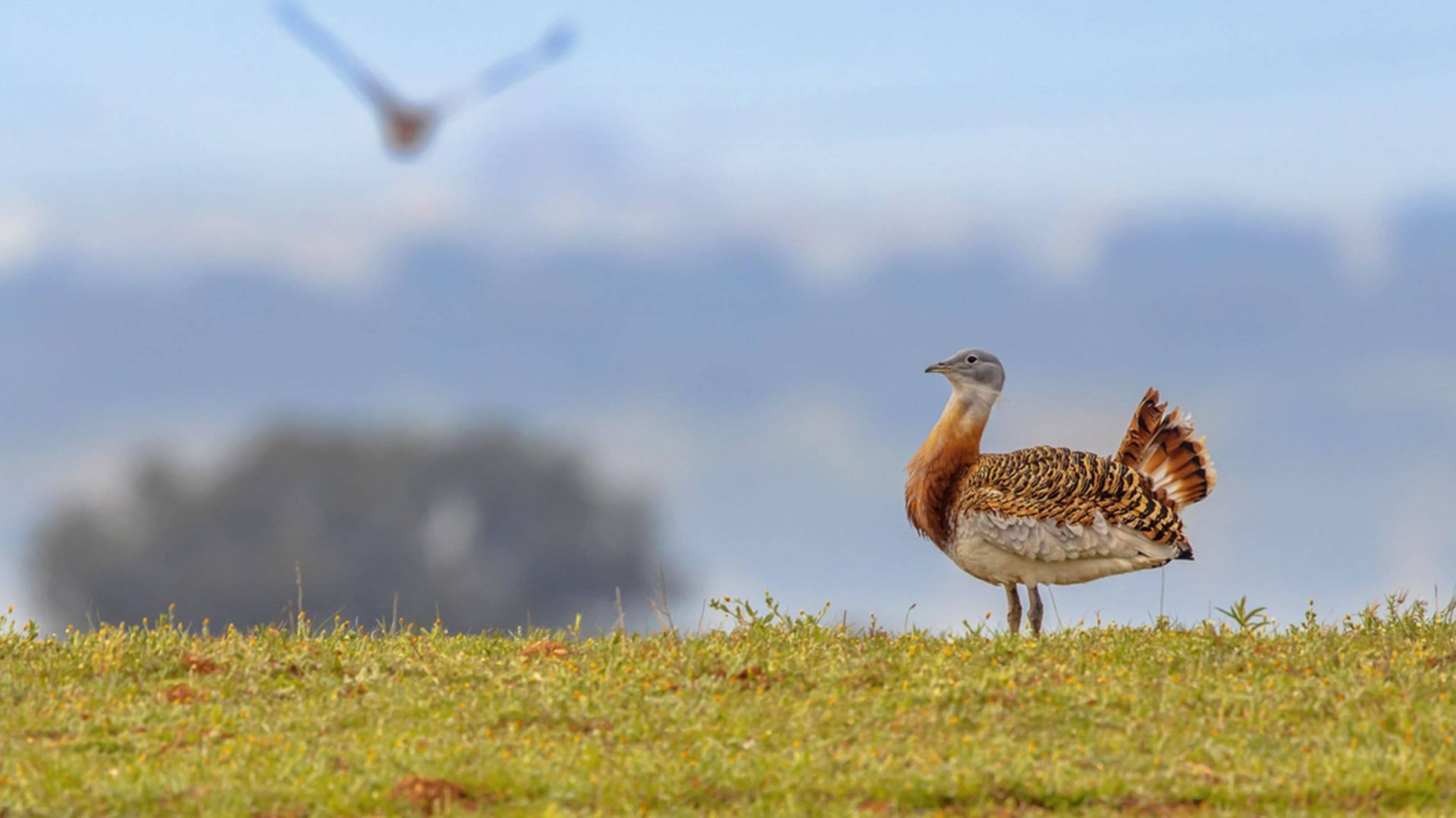 Anyone who sees a Great Bustard cannot but be impressed: either because of its large size, similar to that of a turkey, or because of the rarity of the sighting. In Portugal, this bird can be found mainly in the Alentejo, with the Castro Verde region having the largest population of bustards.

The Great Bustard (Otis tarda), also known as the Eurasian Great Bustard, is a heavyweight of the avian world, amongst the heaviest flying birds in the world. One of the heaviest birds native to Europe, males can exceed 15 kilograms, while females are around five.

With golden-brown plumage, black and white stripes, a bluish-grey head and long legs, males and females differ not only in size. For example, the female’s neck is thinner and lighter in colour and in spring males sprout long “whiskers”, similar to ears of wheat. In males, changes in the pattern of the plumage over their lifetime also serve as an indicator of their approximate age.

With an unmistakable cry and an excellent runner (up to 48 km per hour), the Great Bustard is a bird that is not easy to observe – especially in the case of females, whose smaller size makes sightings difficult. On land, the best time to observe it is in spring, between mid-March and early April, when the nuptial displays take place. In flight, it can be identified by its wingspan and the whiteness of its belly and wings, on which some black feathers stand out (the so-called remiges, resistant feathers that are used in flight).

The Great Bustard’s habitat consists of extensive, flat and semi-arid areas, where a range of food is available for this omnivorous species. It mainly eats plants (grasses, leaves and fruits), invertebrates (especially insects), seeds and stubble.

These are characteristics of the Alentejo cereal plains and this is where the main breeding areas of the Great Bustard in Portugal are concentrated. In this region, the Castro Verde Special Protection Zone is worthy of note. This is where the majority of the bustard population lives and where their nest sites are concentrated. This is why the population census of the species takes place here, and is also the reason for the creation of Route CM1138 – Route of the Bustards, a 14.5-kilometre route that is part of UNESCO’s World Network of Biosphere Reserves.

The presence of the species is not, however, confined to the Alentejo. The geographical areas in which it lives extend, for example, to Beira Interior (Campina de Idanha) and the Tagus estuary (Ponta da Erva, in Vila Franca de Xira). Although it is less likely to be spotted outside the Alentejo plain, with luck you can see it, for example, near the Tagus River, particularly in summer, when flocks of several dozen or even hundreds of birds gather.

In Portugal, the 2021 census carried out in Castro Verde found a population of 750 birds, a decline on previous years. The low population numbers of the species justify its classification as an Endangered Species by the Red Book of Vertebrates of Portugal. Worldwide, although there has been a fall in numbers, it has been classified as of Least Concern in Europe and Vulnerable internationally, by the IUCN – International Union for the Conservation of Nature – Red List. The species is listed in Annex I and II of the Bern and Bonn Convention on the Conservation of Wildlife and Natural Habitats of Europe, and in Annex II-A of the Convention on International Trade in Endangered Species of Wild Fauna and Flora of Extinction (Cites).

How do we take care of the Great Bustard?

The Great Bustard was one of the species included in the LIFE Projects for the Conservation of Steppe Birds in the Alentejo. This species has been identified in Aljustrel, on the properties of The Navigator Company, but also occasionally in other forest areas it manages in Malcata and Pegões.

On these properties, especially in the Alentejo region – which is part of the Castro Verde Special Protection Zone – Navigator maintains a vast expanse of plain, and cork oak and holm oak, where herbaceous, agricultural crops and scattered holm oaks predominate. These areas thus provide optimal conditions for the species to feed and nest. The presence of ponds scattered across the property supports the viability of this habitat for the Great Bustard, for other steppe birds such as the Little Bustard (Tetrax tetrax) and for animals that provide food for a number of birds of prey.