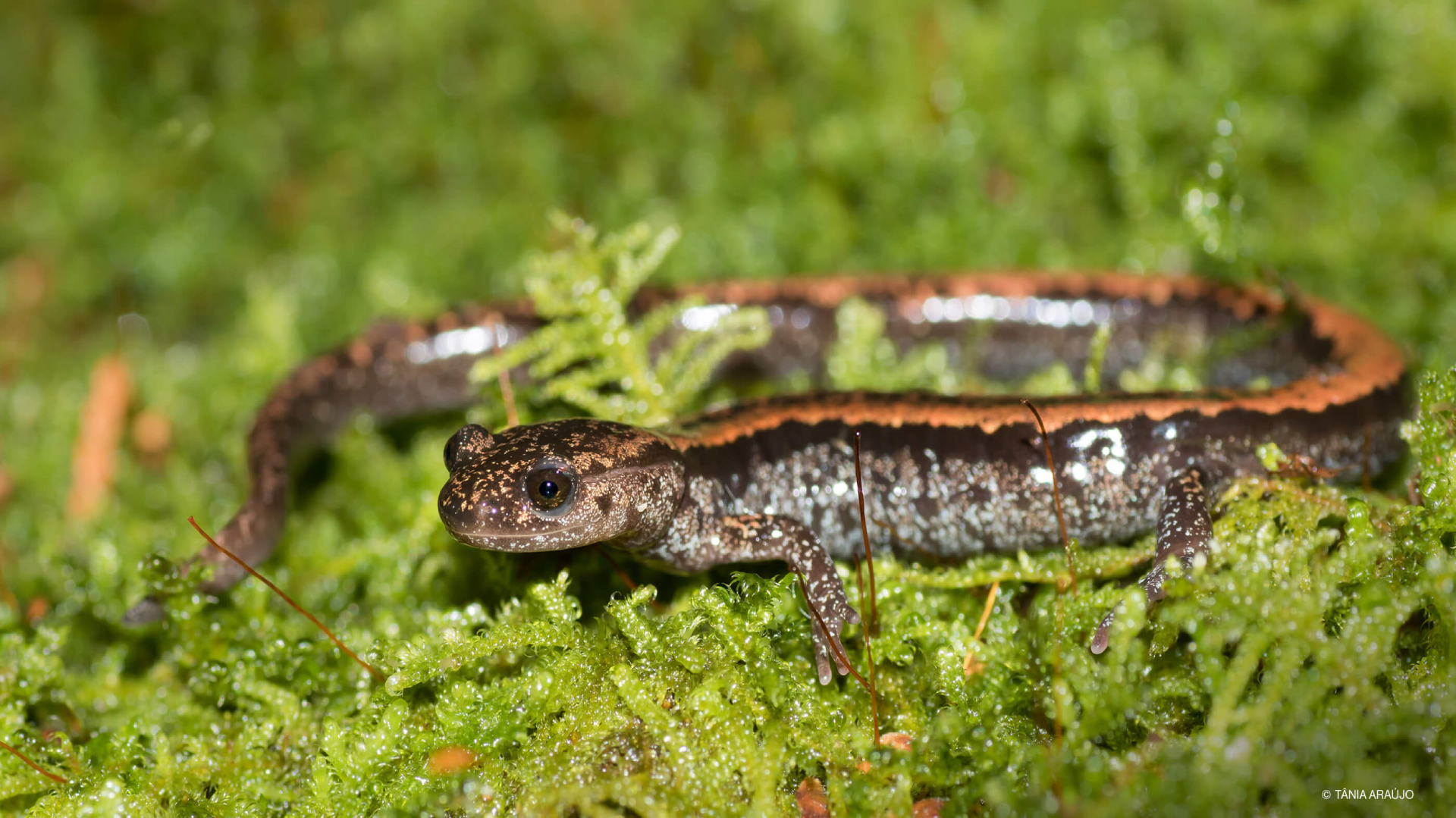 The Gold-striped Salamander was discovered in the 19th century and the only place in the world it can be found is the Northwest of the Iberian Peninsula (Portugal and Spain). This species, which is easily identified by its long tail, is classified as vulnerable.

Anyone who passes through the National Parks of Peneda-Gerês, Alvão, Serra da Estrela, or the landscapes of Serra do Açor and Gardunha may have had an encounter with the Gold-striped Salamander (Chioglossa lusitanica), and it can also be seen in the Serra de Sintra, where it was introduced. This is a species that only exists in the Northwest of the Iberian Peninsula and was described by naturalist Barbosa du Bocage in the 1860s.

It is a small salamander – it can grow up to 15 centimetres long – and is notable for its long tail which, in the case of adults, can make up as much as two thirds of its total length. With protruding eyes and shiny skin, the Gold-striped Salamander has two golden or copper-coloured dorsal lines, which join to make a single line along the tail.

Despite having terrestrial habits, this species lives near streams, in mountainous areas (up to an altitude of 1400 meters) with abundant vegetation and high levels of humidity. This amphibian lays its eggs along the banks of water courses. The breeding season takes place between May and November and each female can lay 15 eggs under rocks that are slightly submerged, in hollows in water, or even in caves. After hatching, the species undergoes a metamorphosis that can take nearly two years and its life on land extends on average for another eight years.

Changes to its habitat, pollution of water courses and rural fires are some of the main threats to this species. It was classified as vulnerable due to the restricted area in which it can be found and the decline in the number of individuals. This classification requires measures for the preservation and rehabilitation of the habitats in which it lives, as well as the places where it breeds – such as mines and caves.

How do we protect the Gold-striped Salamander?

The Gold-striped Salamander is one of the species identified in the properties managed by The Navigator Company, within the Valongo Special Conservation Area.

As in all the company’s properties, forest management here is carried out with respect for the conservation of biodiversity and with a concern to preserve this species. To this end, several measures have been implemented to conserve the Gold-striped Salamander, in particular the creation of protection belts for water courses and ponds, where intrusive forest management operations are prohibited or restricted.

In addition, vegetation and habitat restoration are carried out, which are fundamental to ensuring the food sources, reproduction and refuge for this and other species that live in riverside areas, and contributes to water quality and carbon storage.