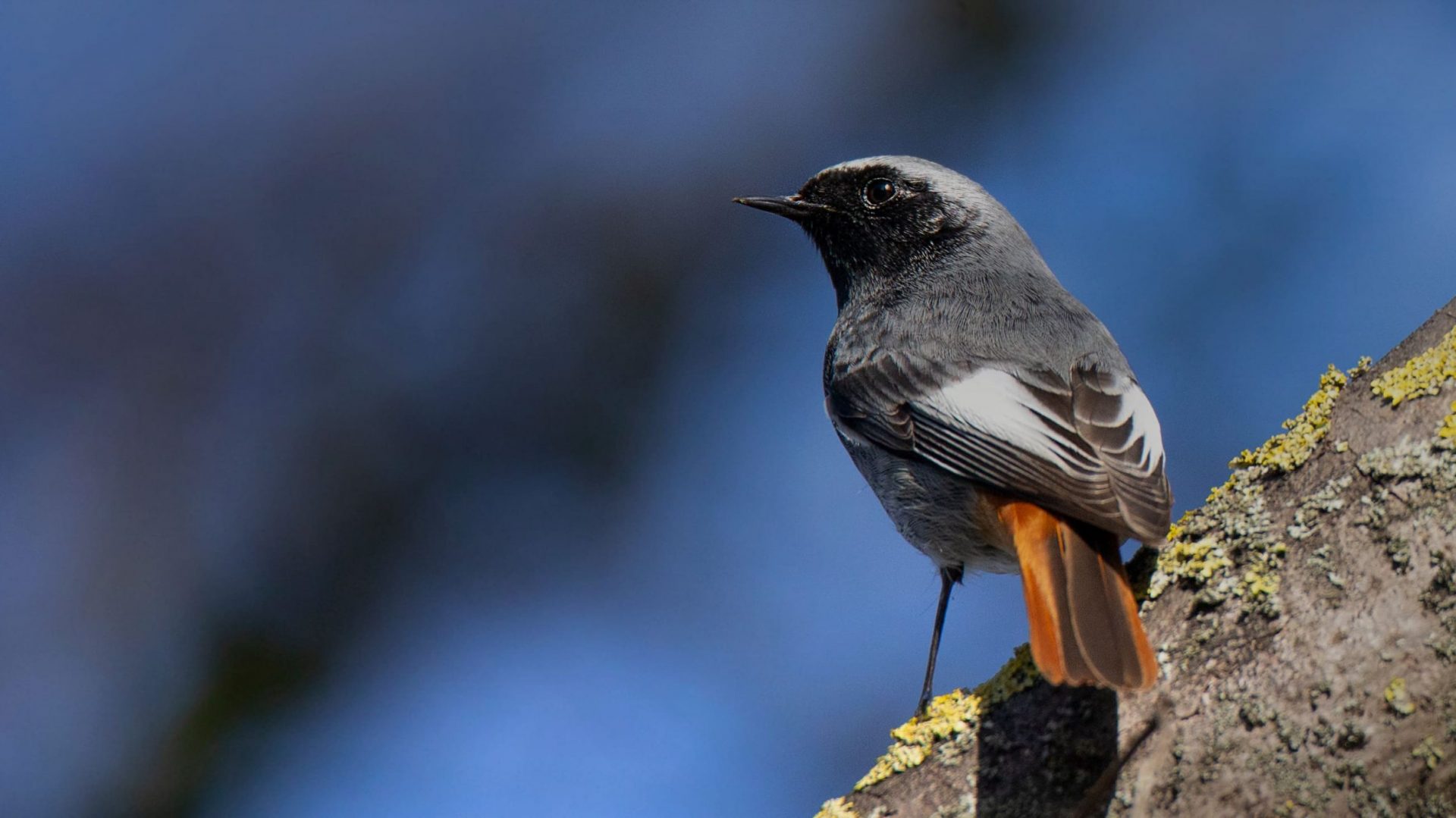 The black redstart is a small, solitary and restless bird, and measures 14 centimetres long. It has dark feathers, as its name suggests. Its distinguishing feature is its orange tail.

If you see a slender, dark bird with a lively flame-coloured tail, chances are it’s a black redstart (Phoenicurus ochruros). Also, it’s likely to be just the one, since this species does not fly in groups. Both males and females have the reddish tail and share the same thin black beak and legs. But there are features that tell them apart: the male is greyish-black in colour, displaying a broad white spot that is mostly visible in spring and summer; females, on the other hand, are greyish-brown and their heads and backs are darker than their bellies, with tones more similar to those of juvenile birds.

The female black redstart builds its bowl-shaped nest using dried grass, leaves, and moss. It prefers protected locations, such as crevices in rocks and quarries, ruins, and old buildings. It also nests in forested areas, such as pine forests, in cracks in the trunks of stone pines. Farmland, olive groves, vineyards, gardens, and urban buildings are among the many types of habitat it has adopted. There are also cases in which nests have been reported to be found in barbecue grills, tractors, and watering cans.

Their breeding season, which occurs between February and mid-August, is distinguishable by their chirping, a highly distinctive singing that begins at dawn. The song differs depending on its purpose: the black redstart sings to establish its territory or when it is building a nest, but also when its eggs are hatching and only up to when its chicks are born. The species breeds both in uplands (slopes, escarpments, and bushes) and lowlands (cities and industrial areas). The female lays eggs two or three times between April and June, and her four to six white eggs are incubated for 13 to 17 days. Young birds are fledged at 32 to 35 days of age.

Despite being insectivorous, the black redstart has a varied diet and is an excellent hunter. It hovers near walls, catching insects in the air, but prefers to feed on the ground and eats worms, spiders, and snails. By late summer and early autumn it also feeds on widely available seeds and berries. Another technique used for hunting is hopping on the ground, rocky outcrops, walls, and rooftops.

The species is distributed across central and southern Europe, North Africa, and Asia. In Portugal, it is a common presence, but nests mainly north of the Tagus River. South of this river it nests occasionally and can be seen in smaller numbers on coastal cliffs and escarpments of the north of Alentejo.

Protected by Annex II of the Berne and Bonn Conventions, its conservation status is considered to be of “Least Concern”, both in Portugal and worldwide, according to data on the IUCN Red List – International Union for Conservation of Nature.

How we look after the black redstart

The black redstart is one of the species sighted in several forest areas managed and preserved by The Navigator Company in areas of Portugal such as Malcata, Tâmega, Mogadouro, and also the Alentejo. It is a common presence in stone pine areas, where it nests, taking advantage of cracks and crevices in tree trunks (photo above).

Also at Quinta de São Francisco, located in Aveiro, it is among the 70 bird species that have already been identified there. In addition to being a natural refuge, it has several nesting sites. The nooks and crannies of the trees, the surroundings of the buildings of this estate and the areas near the water tanks are perfect places to hunt insects and make their nests. For example, next to the old house of Jaime de Magalhães Lima, the chirping of young birds is not uncommon.

Regardless of the location, the main objectives of care for the black redstart are to ensure the peaceful reproduction of the species and the preservation of the places it typically chooses to nest. Besides, this species is well adapted to the most diverse habitats, has a diversified diet, and even tolerates the presence of humans.