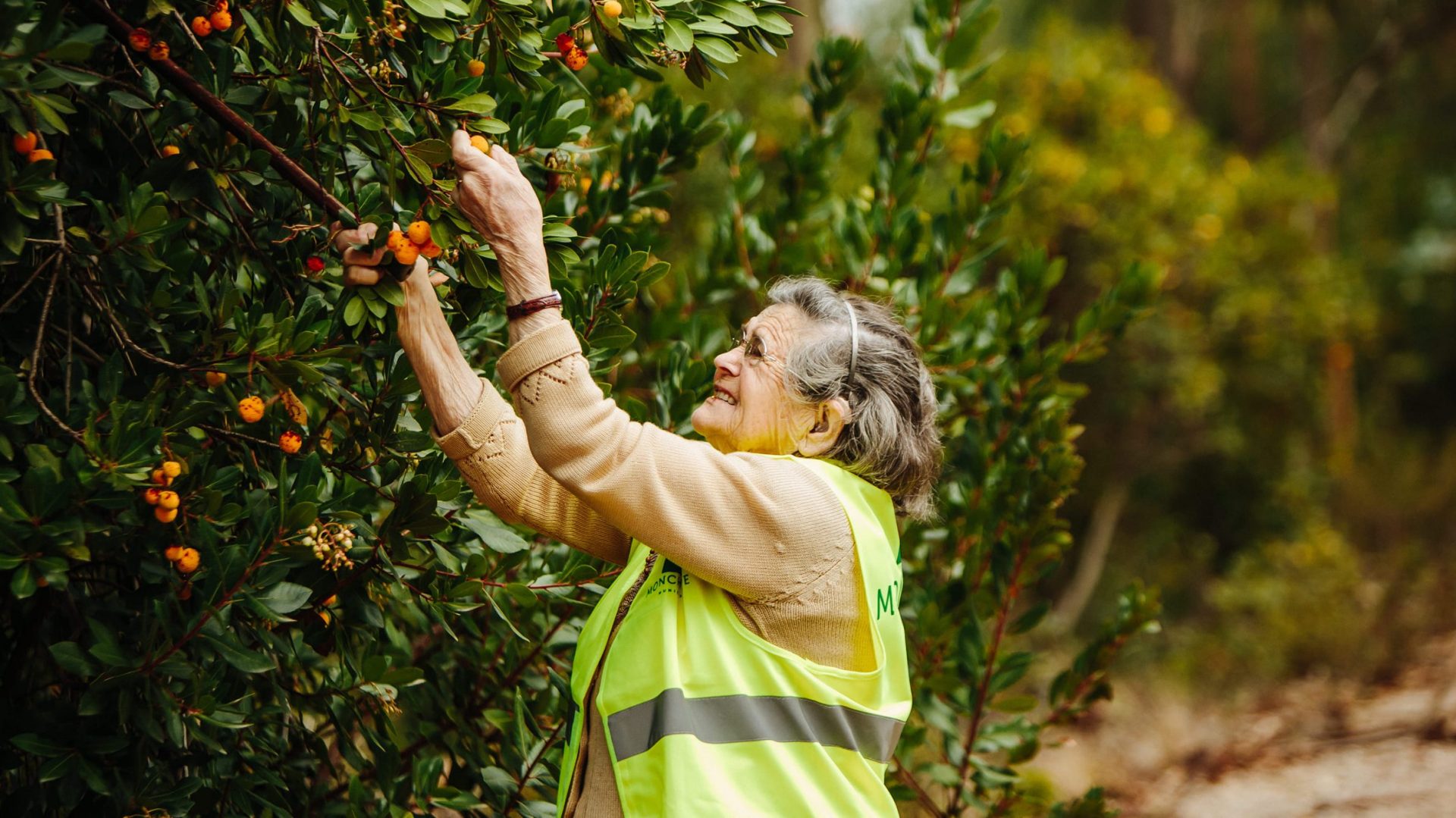 In the forests of Águas Alves, Monchique, arbutus berries are harvested by many hands. When autumn sets in and the branches of the strawberry trees grow reddish clusters of fruit, the patrons of the Santa Casa de Misericórdia de Monchique come out to remember times past and, as they share memories and stories, the baskets are filled with fruit.

Finding arbutus berries in Águas Alves is not difficult. At this Navigator property, covering more than 400 hectares in the Serra de Monchique, 200 hectares are covered by stands of strawberry trees (Arbutos unedo) and cork oak (Quercus suber), two species that coexist well and share a long tradition in Portuguese forests.

Every autumn since 2017, the arbutus berry harvest has had several dozen helpers thanks to the “Reviving Traditions” programme, a partnership between Navigator, the Municipality of Monchique, and the local Santa Casa charity. And, while the pandemic disrupted plans in the years of greater restrictions, the programme remained in force and continued to organise this special day for being outdoors, socialising, and sharing memories. This is because arbutus berry harvesting is an old tradition in the community. It is part of the region’s culture and has provided an income for many families, for several generations.

As part of the programme, the group arrives early on the agreed day in Águas Alves, ready to find the “best bushes” and the “fruits that are just right”. “It’s not worth picking those, they’re no good for brandy”, “you pick the berries one by one” or “without stalks or leaves and being careful not to spoil the flowers” are some of the tips. Many of the participants, some of them in their nineties, have been involved in harvesting arbutus berries for as long as they can remember. Others have been involved in the transformation process and know all about the steps to follow in fermenting and distilling it to obtain the real arbutus brandy.

Along with other liqueurs, artisanal brandy is the main way of using these fruits which many foreigners call “autumn strawberries”. Although traditional uses prevail in Portugal, arbutus berry (medronho) and its derivatives today have a much wider range of applications – in the agri-food industry, cosmetics and medicine, for example. Developments in the applications of this fruit are increasing its potential impact on the national economy.

Equally important is the ecological value of the strawberry tree, a pioneer species whose planting has been increased (including in this region of the Algarve) where the aim is to recover and increase the resilience of forest and agroforestry ecosystems against climate change, erosion, and fire. For example, the strawberry tree is one of the species recommended for planting in protected zones and areas crossed by high voltage lines.

Do you know what a pioneer species is?

The species of flora – plants, shrubs, trees – that are the first to settle and reproduce in ecosystems where conditions are not hospitable to most forms of life are called pioneers. For example, in very dry or fire-prone areas.

Little by little, pioneer species such as the strawberry tree are helping to improve the conditions of the ecosystem in which they take root. For example, their shade reduces the heat reaching the ground, their vital functions help to fix nutrients in the soil and release moisture into the atmosphere, and their presence reduces exposure to wind. Thus, they contribute to making the ecosystem more inviting to new species.

Strengthening the resilience of forest ecosystems

“The strawberry tree is highly resilient to fire. It has a rapid ability to regenerate and recolonize after forest fires and is usually one of the first species to sprout again in burnt areas.” This quote from “Medronheiro – Manual of good cultivation practices”, published by the Polytechnic Institute of Coimbra, also states: “These characteristics make it an interesting species for reforestation programmes and fire prevention measures…”.

The resilience of forest and agroforestry ecosystems is a golden rule for those who invest in and depend on them. This argument alone justifies the option for mixed stands of strawberry tree and cork oak – two pioneer species – in a large area of the Águas Alves property.

Vânia Oliveira, who supervises land use at Navigator, recalls another: “since it blooms between October and February, the strawberry tree is an important source of food for pollinators during autumn and winter”. Plants such as strawberry tree and gorse (Ulex spp.) or trees such as common eucalyptus (Eucalyptus globulus) contribute many pollen grains at this time of year.

Biodiversity in forests: far beyond our gaze

Most life on Earth is to be found in forests, states the report “The State of the World’s Forests 2022” by the Food and Agriculture Organization of the United Nations (FAO), which also points out that biodiversity is at its most extensive in forests, not only in terms of species diversity, but also in terms of genetic and ecosystem variety.