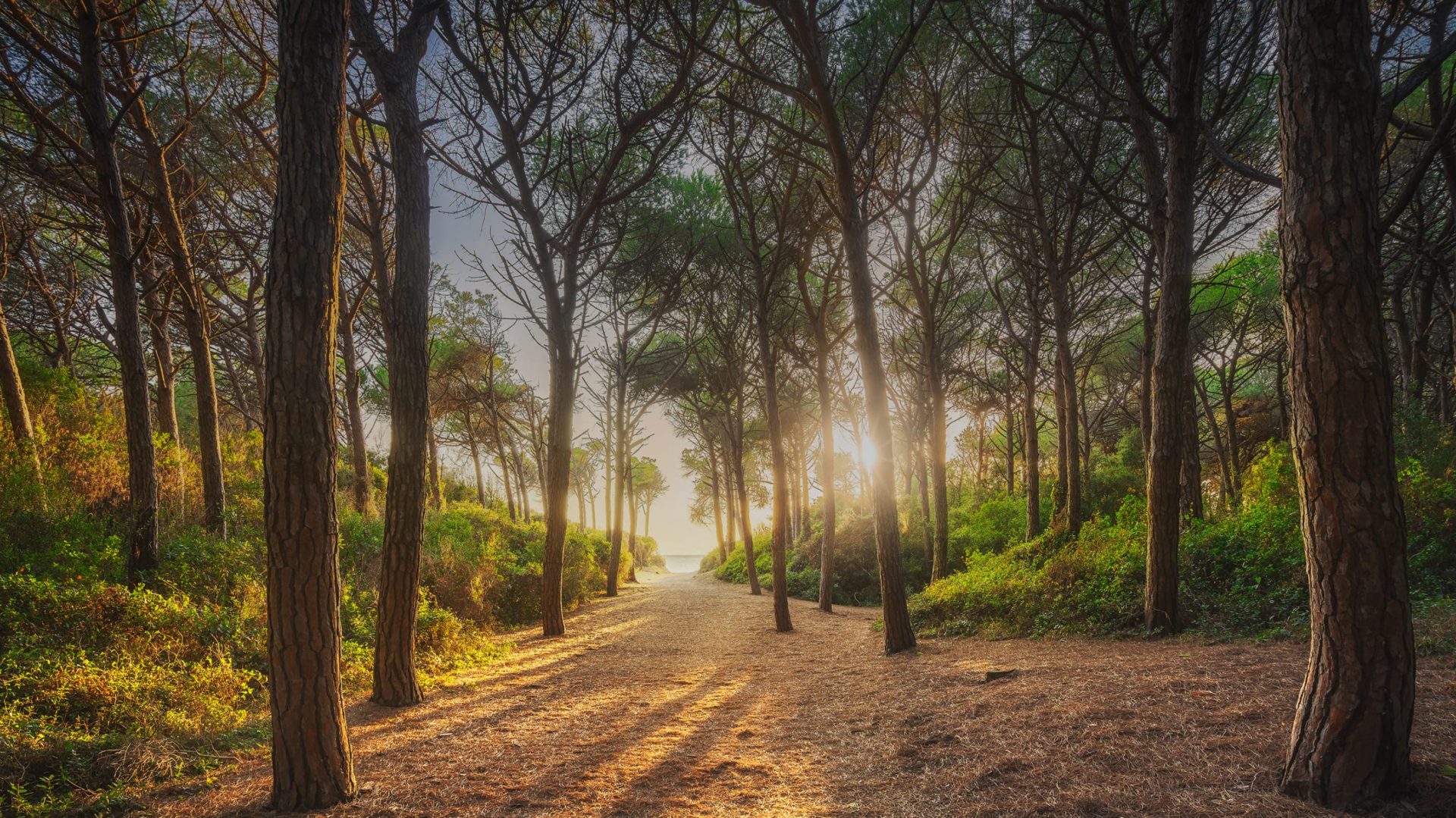 The chaotic sea of dunes, which was progressively encroaching on the farmland, was contained and sown with pine. On the high waves of sand, the green foam of the scrub was born and the pine trees, dark and rough, sank their roots”, wrote Jaime Cortesão (1884-1960), in “Portugal, Land and Man”, describing one of the biggest ever reforestation campaigns, to which the Portuguese coastline owes its pine forest habitat.

Several types of trees we know as pine (a species of the genus Pinus) grow naturally in Portugal, but the large areas of pine forest that stretch from north to south would not exist if they had not been planted. The Leiria Pine Forest, where planting began during the reign of King Afonso III (1210-1279), bears witness to this and was one of the first reforestation initiatives in the world.

Centuries later (from the 18th century onwards), new pine forest habitats were created from the Minho to the Algarve to halt the advance of coastal sand, which threatened to occupy villages and agricultural fields, and silt up river mouths. In 1936, more than 23 000 hectares of dunes had been planted with trees, mainly pine, and it is to these that Jaime Cortesão refers when he talks about the “penisco” – one of the names given to the seeds of the maritime pine (Pinus pinaster). At that time, there were also large-scale reforestation campaigns of waste land, in which thousands of hectares of trees were planted on mountain slopes, especially in the centre and north of the country (Serra da Estrela and Serra do Gerês, for example). Once again, maritime pines were the species of choice.

Portuguese pines forests are, therefore, mostly made up of the Pinus species most commonly seen in Portugal, the maritime pine, but also the stone pine (Pinus pinea) and the less frequent Scots pine (Pinus sylvestris), considered rare (there is only one native population in Gerês) and endangered, according to the Red List of Vascular Plants for Mainland Portugal. There are also exotic species of Pinus, such as the black pine (Pinus nigra) which has been planted quite widely, the Aleppo pine (Pinus halepensis) and the Monterey pine (Pinus radiata). The first two are native to other European countries and the last one to North America.

With such a widespread presence in Portugal, “pinewoods are the second largest forest formation, with an area of almost 1 million hectares…”, says the sixth National Forest Inventory, only surpassed by the evergreen hardwood formations: forests of cork oak (Quercus suber) and holm-oak (Quercus rotundifolia).

There are various species of flower that grow in the underbrush of the pine forests and animals that live or feed on them, although there are differences between coastal pine forests (dune), inland and mountain pines, as well as between the north and south of the country, since the different locations, with different topography, climate and soils, end up creating pine forest habitats with distinct characteristics.

Gorse, Spanish lavender, Montpellier cistus, heather and ferns are examples of the flora that usually grows under the shade of the pine tree canopy. Along the coast, animals you may encounter include amphibians and reptiles such as the Iberian spadefoot toad, the Montpellier snake, the viperine water snake, the snub-nosed viper and Carbonell’s wall lizard (the latter is native only on the Iberian Peninsula – an endemic species). Some of the most common birds are tits, but also woodpeckers and wrens, and mammals include the fox and the genet, the field mouse and the squirrel. For many of them (birds and mammals) pine nuts are a source of food: the ways in which fallen pine cones are chewed indicate the presence of different species.

It should be noted that several maritime pine forests and stone pine forests (or mixed forests) with adult trees located on coastal dunes are included as one of the priority habitats for conservation in the Natura 2000 Network Sectoral Plan – Habitat 2270. This habitat can be found from the area of Ovar and Espinho, in the North, to Vila Real de Santo António, in the South of Portugal, but describing this habitat is complex as it covers a very wide and specific set of characteristics, including the species of flora identified in the undergrowth of these pine forests, such as the existence of cork oak forests, Kermes oaks, juniper and/or crowberry thickets (which, in turn, are part of other priority habitats of the Natura Network Sectoral Plan 2000).

How do we manage pine forest areas?

Pine trees can be found in most of the woodlands managed by The Navigator Company in Portugal. The maritime pine is, in fact, the forest species with the largest presence in these properties, after the eucalyptus and, like it, has been planted for wood production. The stone pine is also common, in this case in several areas near the coast, such as Herdade de Espirra, on the Setúbal Peninsula, and Herdade da Caniceira (pictured above), in the Serra de Monchique.

Management in these areas is aimed at maintaining healthy and productive pine woods that simultaneously provide shelter and food for various animal species, namely birds and small mammals. Tits are the main predators of the pine processionary caterpillar and, in specific cases, the installation of bird-boxes can encourage the presence of these birds, which help to naturally control one of the pests that has most affected the health of the maritime pine. In the undergrowth, special attention is given to the control of invasive species that could endanger the diversity of flora that develops naturally under the canopy.

In specific areas in Portugal, Navigator is promoting the re-establishment of oak and cork oak forests (taking advantage of strong natural regeneration) in mixed pine forests severely affected (by pests and fire, for example), maximising their importance for biodiversity. This is a contribution to a habitat subtype – 9230pt2 – from the Natura 2000 Network Sectoral Plan that is being established in Penamacor, in Barroca da Serra.

There are also various species of Pinus in conifer woodland at Quinta de São Francisco. Besides the most common species in Portugal, at this Quinta with a wide variety of species from the four corners of the world, is the unusual Pinus montezumae, originally from Central America.

Increasing the environmental value of the natural and semi-natural forest habitats of Zambujo, a Navigator property located in Idanha-a-Nova, in the heart of the International Tagus Natural Park, is the aim of the Zambujo reCover initiative, which will undertake the ecological restoration of an area equivalent to about 150 football pitches.

The montado is one of Portugal’s most iconic landscapes, and can be found specifically in Alentejo, but this sanctuary of biodiversity, which was first shaped by human activity many centuries ago, is also an endangered habitat.

Old chestnut trees are a haven for biodiversity

At the end of October, the spiky cupules of chestnut trees (Castanea sativa), which resemble small hedgehogs, have already begun to fall. Inside them, the much sought-after chestnuts can be found. This is the case in the mountainous regions of Portugal, especially in the central and northern parts of the country, where the old chestnut trees provide shelter for dozens of species, including rare plants, birds of prey, and highly prized mushrooms.