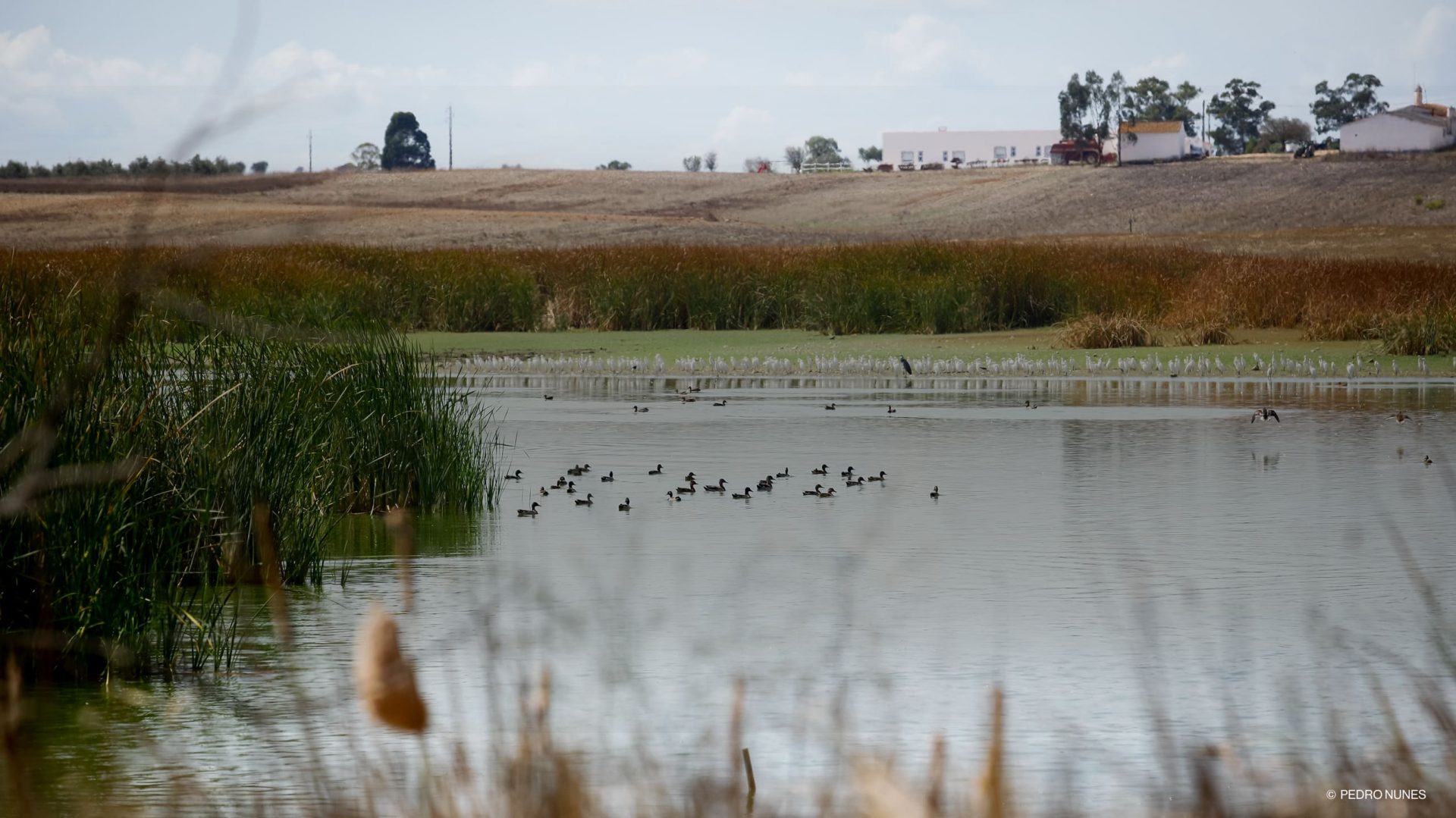 Extensive and unprotected plains, flattened by time and cereal growing, with low grasses, scattered trees and shrubs. This is how the Portuguese cereal steppe, which is also called pseudo-steppe, is a characteristic habitat of the Alentejo landscape and is home to a wide range of species, in particular birds.

The word steppe derives from the term stepj, which means absence of trees, and the lack of trees and shrubs is typical of this habitat. This can be found all over the world, in vast plains far from the sea, bordered by mountain barriers, where the climate is cold and dry.

The Eurasian steppes – stretching from Siberia and Mongolia to China – are perhaps the best known, but steppe also exists in the semi-arid areas of North Africa and the American continent (in the centre and Canada) and are known as prairies. In Portugal, a similar habitat can be found in the Alentejo. They call it cereal steppe or pseudo-steppe precisely because there are differences.

In the Alentejo plains (which are peneplains, with undulations smoothed out by erosion over millennia), the hot climate and human activity have left their distinctive mark. Like the cork oak forest, the Alentejo pseudo-steppe only exists because grazing and agriculture have prevented the natural regeneration of a good number of the medium-sized plants (especially shrubs) that naturally existed there, forming vast expanses that ended up becoming habitats for hundreds of species. Without human intervention, many of these animals would not be able to feed, nest or live here.

This landscape, which has long been shaped by extensive livestock and agricultural production, was also influenced by the “Wheat Campaign” that encouraged the transformation of uncultivated land into irrigated cereal plantations in the 1930s.

In several areas of the Alentejo, of which Castro Verde is an example, open landscape has been maintained up to the present. Cereal fields are planted with wheat, oats or barley; some areas are covered by stubble, the leaves and stems that remain on the ground after harvesting; fallow areas are left to rest for the soil to re-establish itself until new planting; and ploughed fields will be planted again. In between this mosaic, there are also areas with some irrigated trees and areas of livestock pasture (especially for sheep).

The multifunctional landscape of the Alentejo pseudo-steppe therefore constitutes a high-value ecosystem and an unusual habitat for around two hundred species of birds. Among them are the Great Bustard (Otis tarda) and the Lesser Kestrel (Falco naumanni), both considered to be of priority conservation by the European Union, the Little Bustard (Tetrax tetrax) classified as Vulnerable in Portugal, the Near-Threatened Calandra Lark (Melanocorypha calandra), the Black-bellied Sandgrouse (Pterocles orientalis) and Montagu’s Harrier (Circus pygargus), both classified as Endangered in Portugal, and the Iberian Imperial Eagle (Aquila adalberti) one of the rarest birds of prey in the world.

The fallow fields, those covered with stubble and those where herbs and flowers grow freely – from rockrose (Cistus ladanifer)and cistus (Cistus populifolius) to lavender (genuslavandula) and Centaurea ornata – provide food and shelter for these birds and many other animals, from grasshoppers and lizards to rabbits and foxes. Among the tree species, the highlights are the scattered holm oaks (Quercus rotundifolia), sometimes accompanied by cork oaks (Quercus suber) and olive trees (Olea europea).

How we preserve the cereal steppe

The Navigator Company manages a vast property in the Alentejo pseudo-steppe, in Castro Verde (São Domingos). In this Special Protection Area, the planting of forest species is an exception and most of the property is made up of extensive agricultural crops and fallow lands, as well as holm oak and cork oak forests.

These agroforestry species and the existence of ponds form a mosaic of habitats that are home to a wide variety of animals, in particular resident and migratory birds. You can see steppe species (which depend on the pseudo-steppe as a habitat), waders (which feed in muddy areas) and birds of prey, which use the property to feed or nest.

Considering only animals, more than 160 species have already been registered on this property: 140 birds, 10 mammals, nine reptiles and eight amphibians. Thirty-one of these registered species are threatened and the majority are species protected by different international treaties: the Berne Convention and the Bonn and CITES Conventions. Among them are majestic birds of prey, such as the Golden Eagle (Aquila chrysaetos ), large steppe birds, such as the aforementioned Great Bustard, the resident Red-crested Pochard (Netta ruffina), through to elusive mammals, such as the genet (Genetta genetta) and the fox (Vulpes vulpes), to amphibians that only exist naturally in the Iberian Peninsula (Iberian endemics), such as the Iberian midwife toad (Alytes cisternasii)and the Iberian painted frog (Discoglossus galganoi).